The Last Time That Happened…

The first two chapters of Luke’s Gospel are some of the most familiar in scripture. They are typically read every year throughout the Christmas season, and the family classic A Charlie Brown Christmas features a large chunk of chapter 2 read in its entirety by Linus. For most of us, we’ve heard this story a bunch of times. Yet one of my favorite things about the Bible is that there are countless layers to practically any part of God’s Word. Whenever I spend time with it, and especially when I study it with others, something new jumps out. This year I noticed something I had never paid attention to before. Something big.

It is in the story of Elizabeth and Zechariah, and the miraculous birth of their son, John the Baptist. Elizabeth is barren and past childbearing age when God chooses her to give birth to a great prophet. While this is a special miracle, it is not unprecedented. The Old Testament is littered with miraculous births. Sarah giving birth to Isaac, the Shunamite woman in 1 Kings, etc. It is always a work of God and a work of grace to reveal His power to keep His promises. Here in Luke is a clear echo of God keeping His promise to Sarah and Abraham to call forth a miraculous child from which would come a Chosen People. God was about to call forth a people for His own yet again. But that’s not the only echo.

Luke also talks about John having the Holy Spirit since the time he was in utero (Luke 1:41-45). This is extremely unusual for a prophet. First of all, we should note that before Christ’s crucifixion the Holy Spirit was only given to a small number of people who were called by God to lead in specific ways. It was given to the first few kings, to all the prophets, and to a handful of people for special tasks, (Samson, Gideon, etc.) But this was all as adults when they were stepping into their calling, never as children. I know of only one other time that a prophet was called by God from birth. That is the prophet Samuel.

Samuel was also a miraculous birth. His mother, Hannah, was barren and prayed for God to give her a child. She promised that if God did, she would commit the child to serve Him.

10 In her deep anguish Hannah prayed to the Lord, weeping bitterly. 11 And she made a vow, saying, “Lord Almighty, if you will only look on your servant’s misery and remember me, and not forget your servant but give her a son, then I will give him to the Lord for all the days of his life, and no razor will ever be used on his head.” – 1 Sam. 1:10-11 (NIV)

God answers her prayer and gives her a son, Samuel, and she keeps her promise and brings him to the Tabernacle to live and serve God all his life. The story of Samuel’s call by God can be found in 1 Samuel 3, and is a Sunday School favorite. There we see that God was with Samuel and working through him from the time he was a child.

19 The Lord was with Samuel as he grew up, and he let none of Samuel’s words fall to the ground. 20 And all Israel from Dan to Beersheba recognized that Samuel was attested as a prophet of the Lord. – 1 Sam. 3:19-20 (NIV)

Samuel has a unique origin story, a story that culminates in something even more unique. It is Samuel who anoints David as king (1 Sam. 16). David who was Israel’s most faithful and successful king. David who wrote much of the Psalms, who established Jerusalem as Israel’s capitol and the future home of the Temple, who led Israel to flourishing and to whole-hearted devotion to God. Most importantly, David who received a promise from God that one of his descendants would always be on the throne of Israel (2 Sam. 7). David who was of the tribe of Judah, who was an ancestor of Mary and Joseph, who was an ancestor of Jesus.

The last time Israel had a prophet who was born as an answer to the prayer of a barren woman, who was called from birth to be a prophet, the last time that happened was when that prophet anointed the greatest king Israel ever had. And now this new prophet, John, would follow the same path to identify the King of Kings, born to fulfill God’s promise to His people. Born to be an eternal King who would lead His people in the way of peace forever. Called to fulfill Zechariah’s prophesy that he spoke over his newborn son:

“And you, my child, will be called a prophet of the Most High;
for you will go on before the Lord to prepare the way for him,
77 to give his people the knowledge of salvation
through the forgiveness of their sins,
78 because of the tender mercy of our God,
by which the rising sun will come to us from heaven
79 to shine on those living in darkness
and in the shadow of death,
to guide our feet into the path of peace.” – Luke 1:76-79 (NIV)

The last time that happened, God made a promise to someday change the world forever. And now John would usher in the Savior of the world who would keep that promise. God knows the story He has been writing throughout history. A story of calling a people for Himself, a story of promises given and promises fulfilled, a story of a future hope that would not be in vain. God is still writing that story in our lives today. Sometimes it is hard to believe that God keeps His promises. That our hope is based on a sure foundation. That God will finish the work and the callings that He has begun in our lives. The Nativity stories give us something to cling to in those moments. We know for sure that God has been able to make big promises and to weave together an intricate story across time and history to keep those promises. And God won’t stop now. As you hear those familiar stories this year, remember that our hope is in a Savior who embodies an eternal story, and who calls us to be part of it with Him. 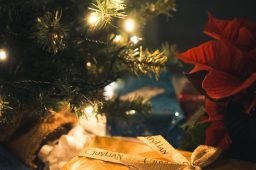