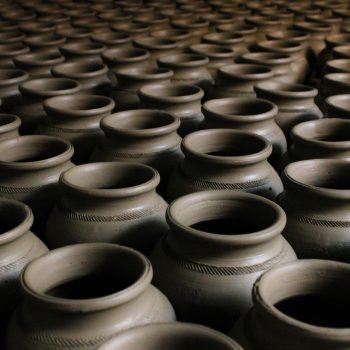 Jesus was hanging out with some people at a guy named Simon’s house when a woman comes in with a jar of perfume. It’s an heirloom kind of jar, made of alabaster, and the perfume inside is the expensive stuff. It’s pure, uncut nard. The tiniest bit is all you need. There’s enough in here to last for years, maybe decades.

But this woman breaks the jar and pours every bit of it out on Jesus’ head. It’s WAY too much. Like it doesn’t even smell good anymore because there is so much of it. And the smell isn’t going away any time soon.

The disciples are like WOAH. That was a waste. If you really wanted to put some fragrance on Jesus, a drop would have done. We could have sold the rest to bankroll the mission.

But Jesus says, “Leave her alone. Why are you bothering her? She has done a beautiful thing to me. The poor you will always have, and you can help them any time you want. But you won’t always have me. [Ned insert: Jesus is NOT making a comment on poverty. He is talking about his death. That time is short (like a couple days)]

“She did what she could. She poured perfume on my body beforehand to prepare for my burial. I tell you the truth, wherever the gospel is preached throughout the world, what she has done will also be told in memory of her.”

What words stick out to you today? Leave her alone? She has done a beautiful thing to me? She did what she could? What word do you need to hear from Jesus today?

Maybe that’s where you need to stop.

But for those of you who would like to read on, I offer you another perspective: the point of view of the jar.

Image this: You are probably the most valuable thing in your house. For as long as you can remember, in fact, for generations of women, you have been on the shelf, protected, only paid attention to on the most important of occasions.

All your life you have been in the shadows. This valuable thing, yes. But always alone. Used for other people’s pleasure, never thanked, never admired, never appreciated.

And one day your owner picks you up. “Come with me,” she says. “Today you are going to anoint a king.” And you can hardly believe it. Your first road trip! And it’s to anoint a king! Wow! You can hardly believe it. It’s like all your life you have been waiting for a moment like this – and here it is – and it’s even better than you could have imagined.

So she takes you into this house. And you look around for this king who is supposed to be there. But there is no one there who looks like a king. In fact, the person in the center of the room looks pretty much like a homeless man.

So why is your owner walking toward him?

And you start to get worried that there must be some kind of mistake. This is not your purpose. You were made for something more important than this. But just as you are thinking that things couldn’t get worse. They do!

Your owner breaks you!

She pours every ounce of what you have been carrying all your life onto this homeless man. What is she thinking? She must have lost her mind. In fact, you hear others in the room saying the same thing: “Why this waste of perfume? It could have been sold for more than a year’s wages.”

And you agree with them. This is insane!

But then, you hear another voice. The voice of the one you are anointing. You hear him say: “Leave her alone.”

And you realize he is looking at you, the broken vessel as he says these words: “Leave her alone. She has done a beautiful thing to me. She did what she could. She has poured every ounce of herself on my body beforehand to prepare for my burial. I tell you the truth, wherever the gospel is preached throughout the world, what she has done will also be told in memory of her.”

The king has seen your sacrifice.

All the alabaster jar’s life, she thought her purpose was to protect what she had, to keep it hidden, and only give herself a way just a little bit when she had to. What she didn’t know was that before the beginning of time, she had been made to anoint the King of Kings, to be poured our completely and become the final, lasting gift Jesus would receive on this earth.

That on the cross as the nails cut into his flesh and the thorns pressed into his head and his mouth so parched he could hardly talk and he was fighting for every breath – he was smelling something beautiful – a beautiful aroma – a final offering – the one the broken jar gave him.