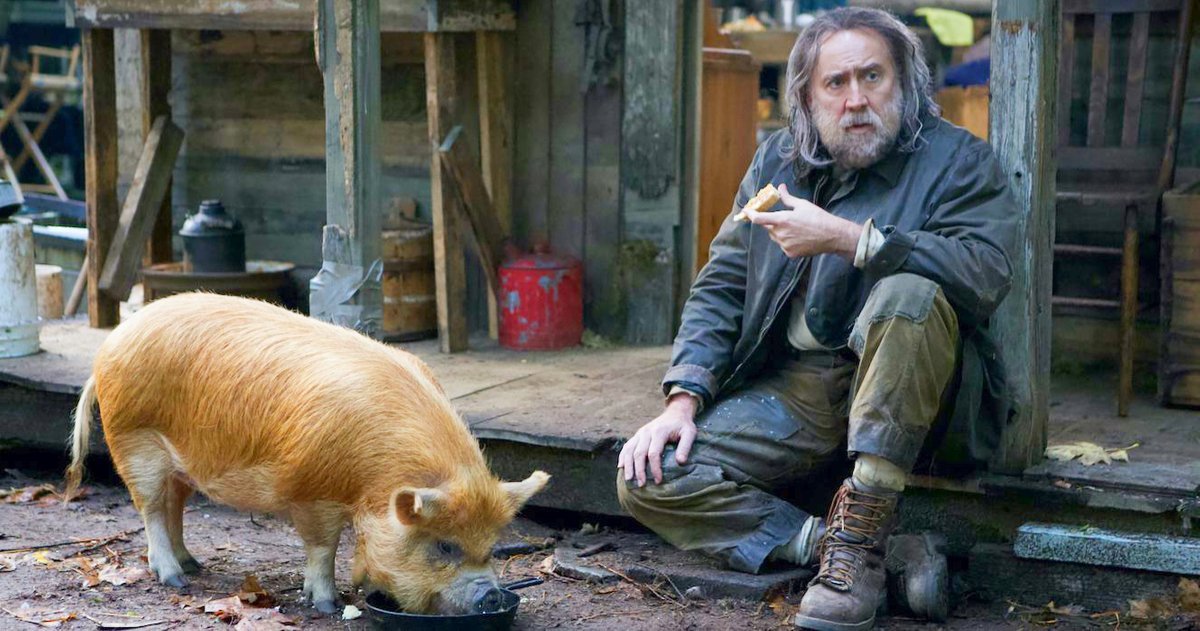 I’m one of those strange people that really love Nicolas Cage movies. And not just the good ones. The quirkier, crazier, and more outrageous the better! So, imagine my surprise and delight when I see the trailer for Pig, what appears to be John Wick except with Nic Cage and a truffle pig.

Just to make sure we’re all on the same page, here is IMDB’s synopsis:

“A truffle hunter (Cage) who lives alone in the Oregonian wilderness must return to his past in Portland in search of his beloved foraging pig after she is kidnapped.”

As I checked out reviews, though, I started to realize that this was not going to be Face/Off or Mom and Dad.  This was a heartfelt slow-burn that reminded the world Nic Cage is an Oscar-winning actor capable of restraint and deep emotional resonance.

Two weeks ago, Jamie and I watched Pig in a theater. There we learned that the film, at its core, was about radical compassion and confronting grief. After my previous post about Christian films needing to find different thematic subject matter, I present Pig to every current and aspiring filmmaker in the Christian/faith-based/inspirational genre.

To illustrate what I mean, let’s look at three scenes from Pig that really jumped out to me.

This was the point where I truly understood this was not Keanu Reeves avenging the death of his dog. When Robin (Cage’s character) re-enters the Portland food scene, he travels to an underground restaurant fighting ring run by a former friend/associate. This is where we first learn that Robin had been a world-class chef in the city before his wife’s death fifteen years earlier. It also feels like it’s about to be the moment where we see him beat down dozens of goons who know where his beloved pig is.

Instead of punching his way to victory, Robin allows himself to be beaten up instead (the fighting ring is basically where people are paid to let restaurant workers beat them up for one minute). He does this in order to earn enough money to buy the next clue to the pig’s whereabouts.

Revenge makes for a good action movie—a good Nic Cage action movie, even! But Christians are not allowed to seek vengeance. That’s up to God. Robin, in a somewhat Christ-like manner, allows himself to experience intense physical pain for the purpose of saving another. This is our first glimpse at the power of self-sacrificial love and what it can drive someone to endure for another…even a pig.

Likely the best scene in the entire film, Robin and Amir (the guy he sells truffles to and has served as his ride thus far) go to a highfalutin restaurant where they hope to find the identity of the true pig thief. After a bloody, haggard Robin asks to speak with the chef, Derek enters the picture.

Derek is the chef/owner/founder of this establishment who just so happens to have briefly worked at Robin’s former restaurant (Robin explains he fired Derek because he kept overcooking the pasta). What follows is Robin systematically dismantling Derek’s life and career: he says the critics, the “deconstructed” meals, and Derek himself are all “not real.” He recalls that Derek wanted to open an English Pub, virtually the furthest thing away from what he’s done on the restaurant spectrum. In short, Robin deconstructs Derek.

The scene could have been structured in a way that inflicted psychological cruelty upon Derek, who we see is a deeply troubled man. But Cage and Michael Sarnoski (the writer/director) somehow deliver this blistering critique of Derek and pretentious food with earnest compassion. Robin does not light Derek up because he is angry about the pig and wants to hurt him. He does so because he recognizes that his former employee is not being true to himself and his dreams.

Even though this breaks through Derek’s defenses and gets us the name of the movie’s true villain, that much is secondary.  Robin wants Derek, a man he only barely knows, to live authentically as himself, not some model of a chef who cooks stuff no one really wants to eat for critics who don’t care about him. He imparts the exact piece of wisdom Derek needs to change his life:

“We don’t get a lot of things to really care about.”

The message is simple: when you find one of those things, hold onto it. Appreciate it. Love it with your whole heart. Though we get no indication what Derek does with this information, I choose to believe he listened and finally continued his pursuit of the life he really cared about.

The third act of a film always has some kind of battle (physical, psychological, etc.) where the hero uses what she’s learned throughout the story to defeat her enemy and win the day. The “battle” in “Pig” is so incredibly touching and kind as to genuinely bring me to tears.

Robin gives a list of things he needs to Amir that he will need to get his pig back from Amir’s father, the man who hired the thugs who took the titular pig at the start of the film (and who serves as a kind of mob boss over the Portland restaurant underground). With my John Wick preconceived notions, I still expected some minor explosives and duct tape. Instead, the list is of ingredients and a bottle of wine.

Earlier in the film, Amir tells the heart-wrenching tale of his parents: a marriage filled with arguing in which his mother was never happy. Even though they scheduled weekly date nights, they always returned bickering and fighting. Except for one night. One night they went to Robin’s place. They loved the food, got wine drunk, and laughed about what a wonderful time they had. According to Amir, it’s the one moment of true happiness in their marriage and one they talk about for years until his mother’s permanent hospitalization.

Robin possesses a photographic memory of the meals he’s made and the people he’s served over the years. This one was no different. After being threatened the first time he came to Amir’s father’s house, he sneaks in and, with Amir’s help, cooks that same meal for him.

At his enemy’s table, Robin painstakingly prepares this food for the man who has done him   great wrong, taking from him the one being with whom he has shared the last fifteen years of his self-imposed exile. In this, he truly loves his enemy.

We watch as, without words, Amir’s father reluctantly eats and drinks, the memories of the best night of his life slowly washing over him until, finally, he breaks down and leaves the room in tears.

I won’t spoil the ending from here, but I think you see what hit me. Robin expresses love in such deep, meaningful service for his worst enemy. Not only is this far more effective than any shootout, it demonstrates love in a way that few Christian movies have ever been able to do.

Even now, this sticks with me. I wonder if I could respond to injustice towards myself with the same gentleness as Robin did. It forces me to pray to Jesus that he might give me that kind of grace and mercy for others, the same that I have received from him.

Pig is a beautiful movie that, albeit with some language viewers may find explicit, in shocking fashion, manages to embody the values of Christianity and the character of the gospel. If that sounds as great to you as it does to me, go buy a ticket as soon as possible.