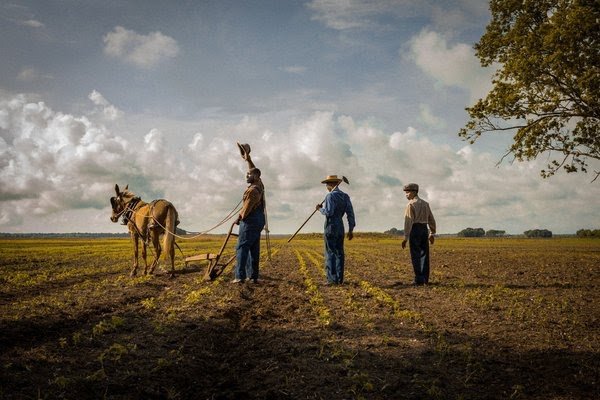 “Over there, I was a liberator. People lined up in the streets waiting for us. Throwing flowers and cheering. And here, I’m just another n***** pushing a plow,” Ronsel says to his new ally and fellow WWII veteran, Jamie. The two have just returned, Jamie from the cockpit of a fighter plane and Ronsel from the driver’s seat of tank in the war to end all wars. What they returned to is the story of Mudbound, Netflix’s newest Oscar hopeful adapted from Hillary Jordan’s novel and directed by Bessie director Dee Rees.

That line tells you a lot about what Ronsel was returning to as he rejoined his family of sharecroppers deep in the muddy Mississippi delta. We’re decades from the Civil Rights Act of 1964. Black citizens of the south are barely able to build a life for themselves. His father, Hap’s, dreams of eventually owning his piece of land are dashed by Jamie’s brother, Henry, who buys the farm and the labor of Ronsel’s family. Jamie and Henry’s father is along for the ride and it just so happens he is heavily involved in the local chapter of the KKK.

Mudbound is very much the story of these two soldiers finding solace in each other in the midst of posttraumatic stress. For Jamie, the war was an opportunity to prove himself a man, at least in his father’s eyes. For Ronsel, being at war was a chance at a new life, a chance to be a part of something worlds away from the sorrows of the pre-civil rights South. They both experienced loss and returned shaken by the horrors of combat. However, they were also both changed in significant ways. Ronsel got to experience a life closer to that of a free man. Jamie, who came from a family of white supremacists, was suddenly in the trenches with soldiers of color. Back in the delta, they recognize a bridge had been formed that couldn’t have existed before the war.

The movie explores the true cost of racial reconciliation. There is a heavy cost because there are often more loses than wins in the battle for unity. From the moment Jamie and Ronsel meet, it is obvious that the heavier burden, the steeper risk rests on Ronsel’s shoulders. There is so much beauty in the story of their relationship building. These two men trying to make sense of the conflict they were coming from that turned their world upside down and the conflict they were returning to that feels tragically the same as it was when they left. Unfortunately, this story doesn’t have a happy ending, but it does have a hopeful one.

Today, the heavy burden, the steeper risk, in the quest for racial reconciliation is still taken by people in the minority. Sure, both parties expend energy and risk alienation from their cultures, but if it fails…if progress finds a bitter end, the people in the majority return to a life built for their flourishing and the people in the minority return to a life they can only hope to survive in. According to 2016 census data, African Americans are the only U.S. racial group earning less than in the year 2000. “Lower incomes make it harder to get by, let alone get ahead. African Americans are much less likely than whites to own homes or invest in the stock market,” says Heather Long of The Washington Post reporting on the data.

America still hasn’t recovered from the systems depicted in Mudbound. Particularly on display in the film is the struggle of Hap, Ronsel’s father. He is introduced in the film with a somber soliloquy about what it means to have a land deed. Hap wants to build a life for his children that was better than his ancestors could have ever imagined. So he works and he works and he works putting his body on the line for his family. His sacrifice means nothing the minute the farm is taken over by Henry. Hap’s dreams of flourishing, of exercising his God-given agency and dominion, are dashed.

Broken dreams and broken bodies are the result of this story. There is hope, though. The narrative of Mudbound often pauses to take Hap and his family to church. At first, they are there when Ronsel’s mother, Florence, prays for his return from war. Later, once Henry buys the farm, Hap delivers a sermon out of John 14. “In my Father’s house are many mansions: if it were not so, I would have told you. I go to prepare a place for you.” He reassures the congregation in their sanctuary, a sanctuary in the process of being built, that even though they don’t have a place of their own in the delta just yet, the Lord is preparing one for them.

The next time Hap and his family are shown in church they are silent. The relationship between Ronsel and Jamie has played out to a violent end. This time Hap stands behind the pulpit saying nothing. Evil has delivered a crippling blow, and it has left them speechless, but they are still there. They might not have the words, but their ability to show up and grieve together sounds a deafening defiance to evil. Sometimes silence is the appropriate response, but as the film closes Ronsel reminds the audience that evil can never silence us forever.

The resiliency, determination, and faith of Hap passed on to Ronsel ends the film with hope. This is a hope the prophet Isaiah relayed to the people in Judah. In Isaiah’s day, Judah’s people didn’t really own the land God had given them. They were under the rule of vassal treaties with larger, more powerful nations. These treaties basically meant that the ruling nation could exploit Judah and its people for resources. Their God-given dominion over the land was gone. Destruction and exile were on the horizon. It wouldn’t be the end of the story though. Another treaty was being made that would not be marked by exploitation, but of flourishing.

Mudbound is a beautiful and haunting film. It might be Netflix’s best offering to date with awards buzz building for stars Jason Mitchell, Rob Morgan, Carey Mulligan, and Mary J. Blige. It is a reminder that reconciliation won’t come easy. It involves taking risks and clinging to a hope that is eternal. The hope that Hap preached with passion from his pulpit carried him through the moments of silence later. Our nation is still divided and that is to be grieved. It seems like every day brings a new level of evil. That evil may leave us speechless, but it will be hope that doesn’t allow us to stay there.

Content warning: while the movie shies away from scenes of graphic violence and sexuality, it does depict racially motivated violent and sensual scenes. It is potentially more emotionally taxing than visually. Use discretion all the same.