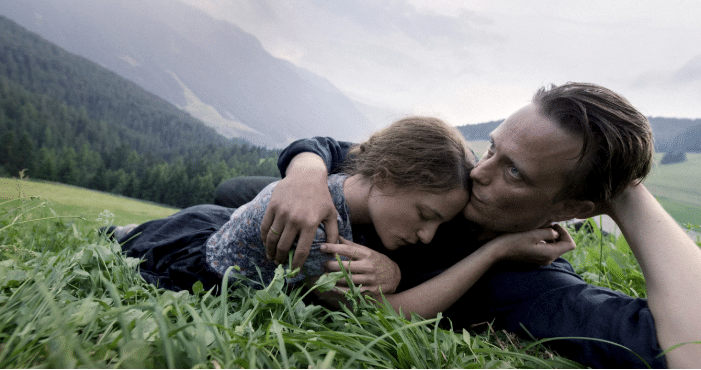 There is a lot of flashy, star-studded content about World War II out there. Rightfully so. It was an era when the world stood up together against a very obvious and treacherous evil. The conflict begs to be adapted again and again. Just this year, Jojo Rabbit approached the time period with humor and heart and Amazon Prime’s sci-fi series Man in the High Castle, that depicts how the world might have been different if the Axis Powers won, entered its final season. Over the years, audiences have followed Patton, banded with brothers, and saved Private Ryan through tons of explosive battles and even more explosive Tom Hanks performances. Now, into the catalog of World War II fare, comes the quiet and contemplative A Hidden Life.

Director Terrence Malik has been to WWII before with the fondly remembered The Thin Red Line, but this time he avoids the traditional trenched and barb-wired battlefield. That often-used setting is traded in for the Sound of Music-esque Austrian countryside. Malik adapted this story from the personal letters between farmers Franz and Fani Jägerstätter. He uses his signature style of frenetic edits and wide-angle lenses to pull the audience into this family’s quiet opposition to Hitler’s regime.

As the story winds tighter and tighter, Fani and Franz share these letters that are so rich with faith and love. Austria has never looked so lush with deep greens and bright blues, but soon it becomes a frigid, isolating prison. All I could think of were those infamous sweeping shots of Julie Andrews spinning while taking in fresh air and music from the hills. In A Hidden Life, Fani claws with her bare hands screaming her suffering into those same blades of grass as their village ostracizes her. Franz, eventually, finds himself behind actual bars locked away from any color at all. The world has left them both pale, cold, and empty. Yet they reach out to each other with warm, comforting blankets of scripture. This is where they find their freedom.

In order to do what Franz and Fani did, you would have to have a foundational belief that nothing on this Earth can take away the freedom we have in Christ. They deeply loved each other, their life in the rolling hills, and their beautifully precocious daughters, but, once their consciences flare in the face of true evil, they have to put their hope in an eternal good. Friends, neighbors, family, priests and lawyers tell them that they could compromise a little and be set free. To that Franz replies that he’s already free.

Another frequent appeal to get Franz and Fani to give in is that no one will ever know the stance they took. What they are doing won’t change the course of the war or send the population of Austria into revolt. If Franz doesn’t give in he will die just as he lived, quietly. What an interesting question for today. What makes a protest worth it?

What comes to mind for you when you think about modern social activism? Much of our social activism is criticized today because so much of it takes place online. On the surface, it often feels like the ability to post online or, as many call it, to hide behind a keyboard, doesn’t cost the tweeter anything. If only we could ask journalist Jamal Khashoggi if posting his opinions came with a cost. Even though the face of modern day social activism is a tiny blue bird on our phones, there are so many people behind those birds screaming to be heard and often dying silently in the dark. But they continue to tweet. Why?

Franz Jägerstätter (played beautifully and stoically by August Diehl in the film) couldn’t compromise. His beliefs planted him and his family firmly into the ground where he made his stand. Fani Jägerstätter (played with intense strength by Valerie Pachner) couldn’t ask her husband to pledge allegiance to evil even if it would bring him home. Even if their protest came with a cost, the cost of their very souls was greater and, they believed, the reward on the other side of righteous suffering, on this plane of existence or the next, was even greater still.

It had to be a challenge to tell the story of a family stoically making a stance. World War II has a lot of flashy stories to tell, but this is a very bleak and colorless one. Yet, Malik tells it in vibrant colors with a style that gives this small protest a grand scale. There isn’t a beach to be stormed or a rousing high note to be sung, but there is an incredible internal battle taking place not just on this farm in Austria but in the hearts of every person confronted with how to respond to true evil. Malik gives you time between the breaths of levity and punches of grief to ask that question of yourself. What is the cost of making a stand and what is the cost of not?