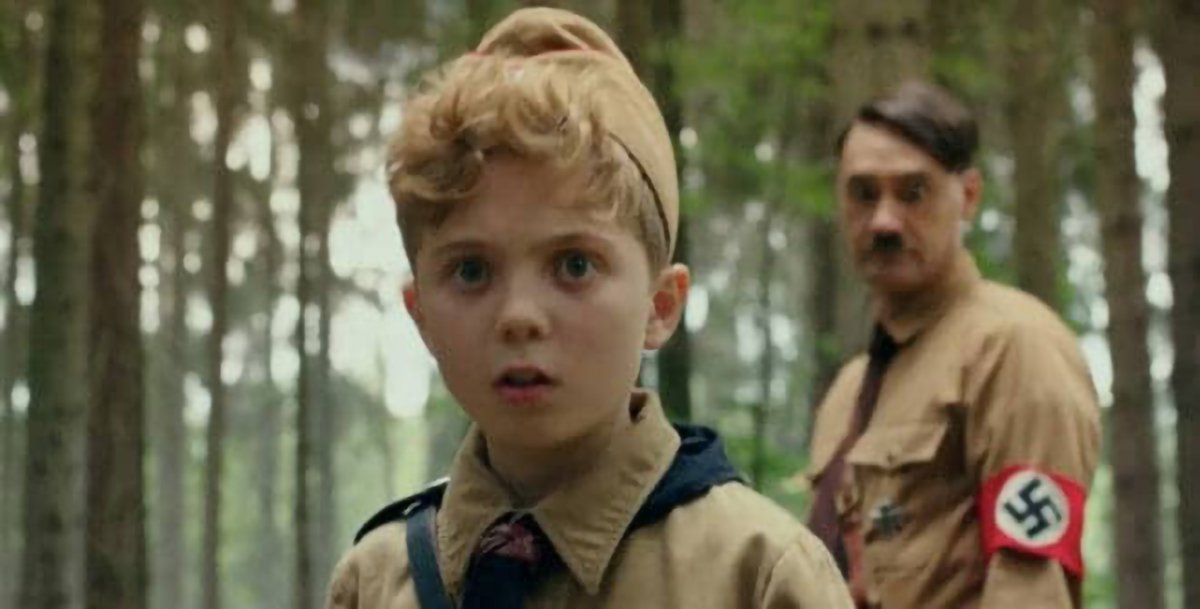 There is nothing funny about the Holocaust or the Hitler Youth or any of our current expressions of white supremacy. And yet, in the midst of the great divisions we feel in our world today, comes Jojo Rabbit, a satirical comedy from Taika Waititi who is known for comedy bangers like What We Do in the Shadows and Thor: Ragnarok.  He’s also known for pulling out the comedy in tragedy like he does in the acclaimed Hunt for the Wilderpeople. This is what he does with Jojo. Waititi tackles a horrific subject through comedy hoping that the laughs will keep our eyes locked on something we often turn a blind eye to.

Jojo is a young German boy who goes away to Hitler Youth camp as World War II is coming to an end. Even in the world of young Nazis in bloom, it’s impossible to escape the clichés of youth. Jojo is starving for acceptance, eager to prove his masculinity, and regularly bullied by the older boys. These are just distractions, though, because Jojo is there to learn how to be the best Nazi he can be. He’s swimming in a pool of indoctrination and sponging up every drop. This is a lot of pressure for little Jojo, but he finds strength in his imaginary friend, a version of Hitler formed in his young mind played by the film’s New Zealander director.

In the role, Waititi gets to pinpoint the absurdity of hate. He’s not just playing Hitler, he is playing the personification of Jojo’s learned racism and fascism. He is Jojo’s sinful nature and he, along with the film as a whole, is brilliant. Calling out the senselessness of white supremacy is easy. People do it all the time on Twitter with short, jabby quips accompanied by the perfect animated GIFs of Kermit the frog sipping tea. Waititi doesn’t leave us with an impactful jab, though. With Jojo Rabbit, he offers a solution, because a quarter of the way through the film something unexpected happens.

In order to talk about some of the power of Jojo Rabbit, we’ve got to dig into spoiler territory. I’m going to spoil a major plot point, but I promise, even if you know it, there are plenty of twists and turns in the film. It is an important point to help draw out the film’s larger themes and, might just be a selling point if you haven’t seen it and you really should! Regardless, if you want to go into Jojo blind, stop reading now and come back!

Circumstances lead to Jojo being forced to stay home from camp where he discovers a young Jewish woman hiding in the walls. Jojo is terrified. He’s chilled to the bone, his veins streaming with the power of an irrational fear of the other. This fear was implanted in him by the counselors at camp and the national pride in the air. It is a fear that could only exist and be made stronger by Jews being an absolute mystery. As long as Jojo doesn’t come in contact with an actual Jew, he can maintain the picture of a hellish demon that has been fashioned in his mind. But then there is Elsa, played with such power by Leave No Trace’s Thomasin McKenzie. She’s thin from eating scraps, and dirty from hiding in the walls, but she is human and Jojo is now locked in the house with her. Proximity will now slowly, but surly, dismantle fear.

This is why Christ dined with sinners, touched lepers, and pushed his disciples into Gentile communities. Fear and hatred can create seemingly insurmountable distance between people, but that vitriol can only survive as long as that distance in maintained. What do you mean that a Samaritan can be good? How can it be that Paul, the ultimate Jewish leader who sparked such violence towards the Gentiles, would be their pied piper of salvation? Fear feeds on the unknown, and the best way to combat that is by making the unknown known. Being locked in proximity to Elsa gives Jojo a chance to see she doesn’t have horns, her heart is actually kind, and yes, she does bleed the same color red. It can be simple or easy for us to let go of distance and separation, but the problem is that fear and hate don’t so easily let go of us.

Just when the disciples were starting to warm up to the idea of the Gospel being for everyone, even the Gentiles, here comes Peter gripped with fear. In Galatians, Paul catches Peter engaging in conduct that “was not in step with the truth of the gospel,” and he is furious. Paul had been working tirelessly to close the distance between these people groups and Peter was driving the wedge again. Peter’s fear wasn’t letting go, and neither does Jojo’s. The more Elsa makes him smile, imaginary Hitler begins to frown. Waititi’s Fuhrer begins acting less like a cartoon character and more like the man of the news reels and propaganda.

Jojo Rabbit depicts the fight for a young boy’s very soul, and, in many ways, the fight for ours as well. Every laugh is followed by a cringe of reality knowing how many adorable little kids, and Jojo actor Roman Griffin Davis is adorable, have been, and are being, turned into monsters with time-tested methods. It is an absurd film, but one that is going to pull you through a gallery of tears. There are tears of laughter, tears of sadness, tears of pain, and tears of great, personal conviction. The film asks what devils of ignorance and fear are living in your own heart while it walks a very fine line between making fun of the hypocrisy and making light of the horrors. This line, however, is walked with a hope that maybe one day we can make hate a figment of our imagination.