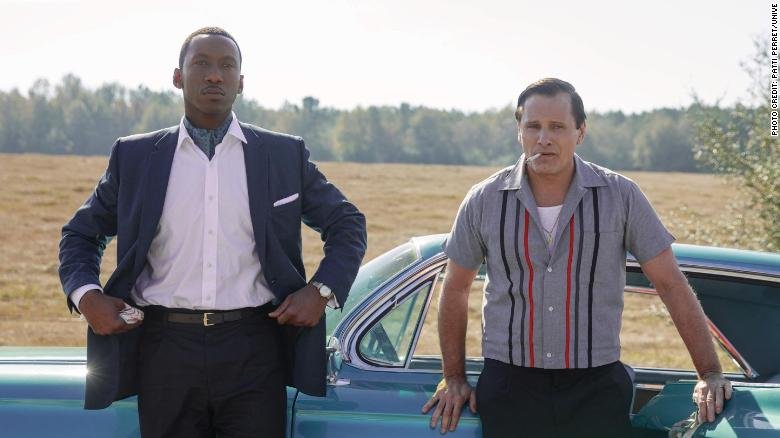 To be honest, I did not want to go see Green Book. I was worried it might be too much like The Help, a corny movie that makes white people feel good about themselves for being indignant at the right moments and then taking a stand in the finale. The kind of movie where you can pat yourself on the back and leave happy over “how far we’ve come.” The kind of movie that shows just enough racism to make us feel cultured while also being comforted by a white hero who fights racism and wins, absolving us of the need for further action. Green Book may have slight moments of this, but manages to ask much better questions to reveal much deeper struggles.

Set in 1962, this true story follows the musical tour of pianist and composer Dr. Don Shirley. Shirley is a classically trained musician, world renowned and a man of immense talent. The film follows a two month tour that take Shirley to the Midwest then on through the Deep South. He knows he will need a driver who is able to handle the details of the tour and also offer a body guard function in racially charged situations. He hires an Italian bouncer from The Bronx, Tony Vallelonga to accompany him. The film draws its title from a book that Shirley gives Tony, The Negro Motorist Green Book which was a travel guide for the segregated South. Shirley knew there would be cities where he and Tony would have to stay in different hotels, towns where he would not be allowed to stay at all. Places were he would receive standing ovations on stage and then return to a run down “colored” motel thirty minutes away.

The strength of Green Book lies in Mahershala Ali’s nuanced performance, and the reversal of roles that occurs with a white driver and a black employer during that time period. Perhaps a direct wink to the older classic Driving Miss Daisy, this movie turns the trope of dignified yet undereducated black employee and alternately racist/benign white employer on its head. Shirley is the epitome of style and luxury, literally interviewing Tony while sitting on a throne. Tony is rough around the edges, speaking with a thick accent and prone to petty thievery. Shirley takes it upon himself to try to help Tony improve his way of life and grow in his potential. Observers in the Deep South are stunned to see a white man openly serving a black man, an unimaginable departure from the social norm.

But Green Book does not stop at surface level script-flips. As the tour progresses, both men are increasingly confronted with the deep and senseless inequities that abound. Shirley feels more and more alienated as he is segregated with his racial group yet has little in common with their way of life. He has been living in isolation. There is a veneer of hospitality from the elite white community but he’s never truly seen as an equal. On top of that, he has difficulty connecting with the black community with whom he has vastly different experiences. Ali beautifully draws us into Shirley’s ambivalence and hurt, a man who must always smile and bow no matter how angry he may be.

The theme of hospitality, both within the movie and for the viewing audience, presents an important challenge. Most of us feel in some way that our place in the world is conditional. We will be accepted and welcomed if we perform. If we deliver what others want from us, then we will be loved. Shirley knows that he is welcomed in so far as his talent pleases other people. He will be beaten or imprisoned if his race or his sexual orientation become more prominent than his ability to entertain. In one particularly striking scene, Shirley has been roughed up by a group of men in a bar in Kentucky, then the next night bows on stage and thanks the community for “their warm hospitality.”

Shirley expresses to Tony that white audiences invite him to play because it makes them feel cultured and after they can return to their segregated lives. Part of his motivation for doing this tour at all is perhaps to force people to deal with him. To not stay conveniently out of sight at the service entrance, but to be a gifted black man who openly challenges assumptions about what black people could be. Perhaps also to show the black community what else was possible. In this process, both Tony and Shirley are forced through their extended proximity to deal with each other as they are, not as they wish each other to be. They have to witness the things about the other that are frustrating and painful and endearing. They learn to step out of their assumptions and isolation and to meet one another as friends.

Henri Nouwen in his fantastic book Reaching Out: The Three Movements of the Spiritual Life discusses this temptation to view others with hostility rather than hospitality. He posits that when we are acting out of our own loneliness and selfishness, we bring others into our lives on a conditional basis. We want to be in contact with others so that they will meet the needs that we have. This leaves no room for the person to be themselves or to not meet our expectations of them. Nouwen paints a picture of a better way to connect:

This is our charge as we leave the movie theater. To take the grim realities and inspirational friendship in Green Book and allow it to motivate us to welcome one another as we are. Not with strings attached and willingness to only deal with some things but not others. To be close to one another even when it means coming face to face with our sin. This is what ultimately changes us and changes society. This is the way we move forward together.