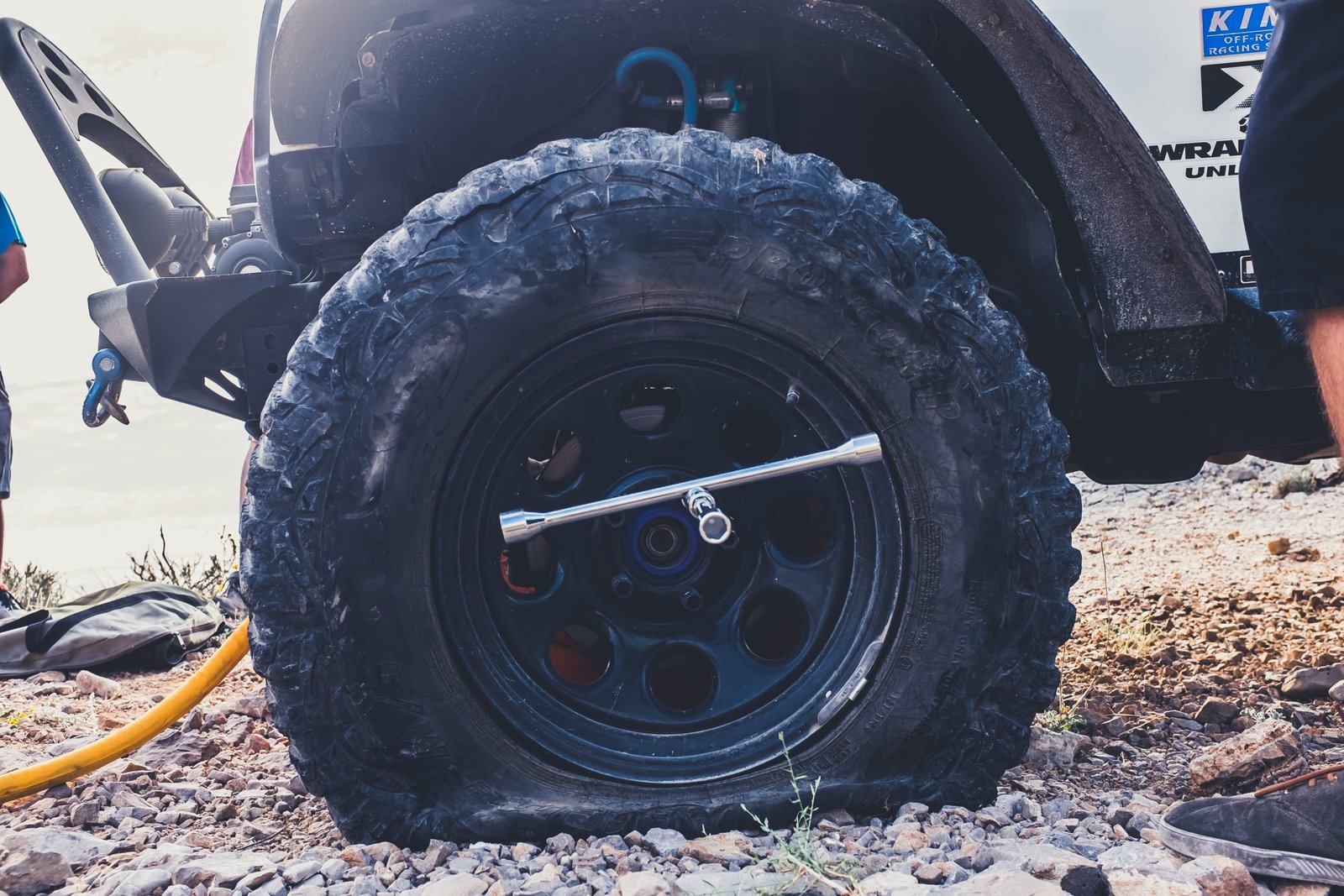 Bound by Love and Flat Tires

Modou is a taxi driver. We hitched a ride with him coming back from N’Gor Island. It’s an island about a half mile off the coast of Senegal. You ride in this skinny boat to get there and then you are at the edge of what they thought the world was once upon a time.

Hiring taxis is how you get around in Dakar, a city of 2.5 million. We saw a lot of it while we were there. But what we didn’t see was traffic lights. There wasn’t even a traffic sign. Cars would go the wrong way around round-a-bouts. It was completely nuts. The good thing was there was so much traffic that you were rarely ever going over twenty miles an hour, so your life wasn’t ever in peril even though seat belts were optional – like some cars had them and most didn’t.

Modou’s taxi looked like a piece of aluminum that had been crumpled and then flattened out again. It puttered and spluttered, but despite the poor quality of his car, of all the drivers we rode with Modou was by far the best. He had this hand signal language that he used to weave through traffic (I guess that’s what you do when you don’t have turn signals – didn’t think about that until later).

Driving home, I did what I could to learn through my broken French about Modou and his life. (This is a personality quirk of mine that drives my children crazy.) He had four children, lived in a small apartment. He was buying a goat for Tabaski, the Muslim holiday that is sort of like Thanksgiving and Christmas. We gave him a tip (like a dollar – it’s not customary to do so – but we were leaving the next day and had some Senegal francs to burn.)

The next morning, Modou showed up early, ready to take us to Rose Lake (this lake has some kind of bacteria in it that turns the water pink. It is saltier than the Dead Sea. You can float in it. It’s quite the experience.) We hung out there for a chunk of the day. Unfortunately we were the only tourists so we were bombarded in every direction by merchants selling their wares. Modou sensing trouble got us out of there quick.

We spent the rest of the afternoon with our friends we were visiting, saying long good-byes until it was finally time to depart.

Because of the traffic, we gave ourselves a solid two hour buffer to get to the airport. Modou was waiting for us. He took our bags and untied his trunk (He used a rope to keep his trunk closed). We said one last good-bye and got in the car. We went 10 feet and I said, “Um, Modou. Your tire is flat.”

Modou jumped out the car. Sure enough. The back right tire was flat as a piece of cardboard. Modou untied the trunk, took out our bags, got out his spare (to be honest, I was surprised he had a spare), he lug wrenched that flat tire off, threw it in the trunk, put on the spare, put our bags back in the trunk, tied it shut and we were off. I never saw a man work so hard.

We rounded the corner and Modou asked if he could do something. I said, “sure.” We had two hours to spare. So Modou stopped by this shack, untied the trunk, got out our bags again, got our the flat, gave it to a guy, who over the next twenty minutes fixed the tire, gave it back to Modou, who put it in the trunk, then returned our bags to the trunk, tied the trunk once again, and we were off a third time.

I’m not nervous yet.

Modou explained that because the traffic was bad, he was taking us a back way. I said, “thanks.” He took us this back way, but the back way was backed up too, so he took us another back way.

We were now going on straight up sand roads through corrugated metal shanty houses that ran alongside an open sewer. I was like where in the world are we! I have my family in the back of this taxi! But what else were we to do, and besides, Modou was working. I mean working. The guy was determined to get us to the airport.

So we got to the end of the other back way and there was an accident in front of the third back road entrance. Modou, undaunted, ok slightly daunted, turned right. Now we were really in the middle of nowhere. Modou turned left. Turned right. We went through sand roads barely big enough for his taxi. Kids were running for cover. Ladies were tsk tsking from doorways. Until finally we arrived at the very last road that was a road. It was straight up nothingness on the far side. And then we stop.

I mean everything was stopped. People were mulling around out of their cars stopped. Modou was beside himself. He started yelling at this horse car driver, who he eventually made drive his horse cart backwards (not an easy task) so we could weave through to the other side of the stopped traffic. But it really didn’t matter where we were. We weren’t going anywhere. We sit for an hour.

This car full of men started talking to us in Wolof, the native language. One guy made a sign for an “avion” plane. Then just laughed. They were all laughing at us. We weren’t flying were we?

Not according to those guys – but Modou was determined.

He hopped up on the sidewalk. Merchants ran for cover. It was Tabaski, so sheep were everywhere, and sheep were scattering because Modou was coming. We were getting on to the highway one way or the other. And we did.

We made it. Almost two hours lost. But we made it to the highway.

Poor Modou’s car was spluttering. His first gear stopped working. It decided that it was now Reverse. Not good. Second worked fine, but third was like no thanks. Fourth engaged, but fifth? Nope. There was no going over forty kilometers an hour in Modou’s taxi, which we discovered now that this was the first time we had ever been in his taxi at night, that the poor guy only had one half of one headlight that worked.

I was really missing the seatbelt now. But what else could we do? We had to make the plane – we had to try.

And Modou was determined.

I was praying out loud. The traffic which was at a crawl finally loosened up. We made our way. We passed a couple smashed up cars that were not so lucky. We kept chugging along with no headlights forty kilometers an hour under the speed limit.

We got through all three tolls. At the last one, we got cut off by a thoughtless driver. Modou used his hand signals to effect. The other car tried to run us off the road. Modou fought back. We all prayed. The other car actually had an accelerator that worked so he left us in the dust.

We arrived at the airport. We made our way to the departures. We got out of the car. Modou was crying. He was overjoyed. He had gotten us here. It had taken him everything he had – but he had done it.

Modou untied the trunk, got out our bags one last time. He bent down and kissed each of my children. He hugged Lia. Modou and I embraced.

I realized at some point during our adventure that he had ceased to be our taxi driver. Our lives had become one. This human and me had become bonded for life.

We went through something together. And it was terrifying. And hard. But we got through it. And the experience was like glue.

It was beautiful. Brutiful as my friend Jess would say. What it was was communion. His life. My life. Becoming one. Bound together by love.

That’s what Modou taught me. That love is forged through trials. That is what happens – or can happen – it was what happened to Modou and me. And I’ll never be the same because of it.