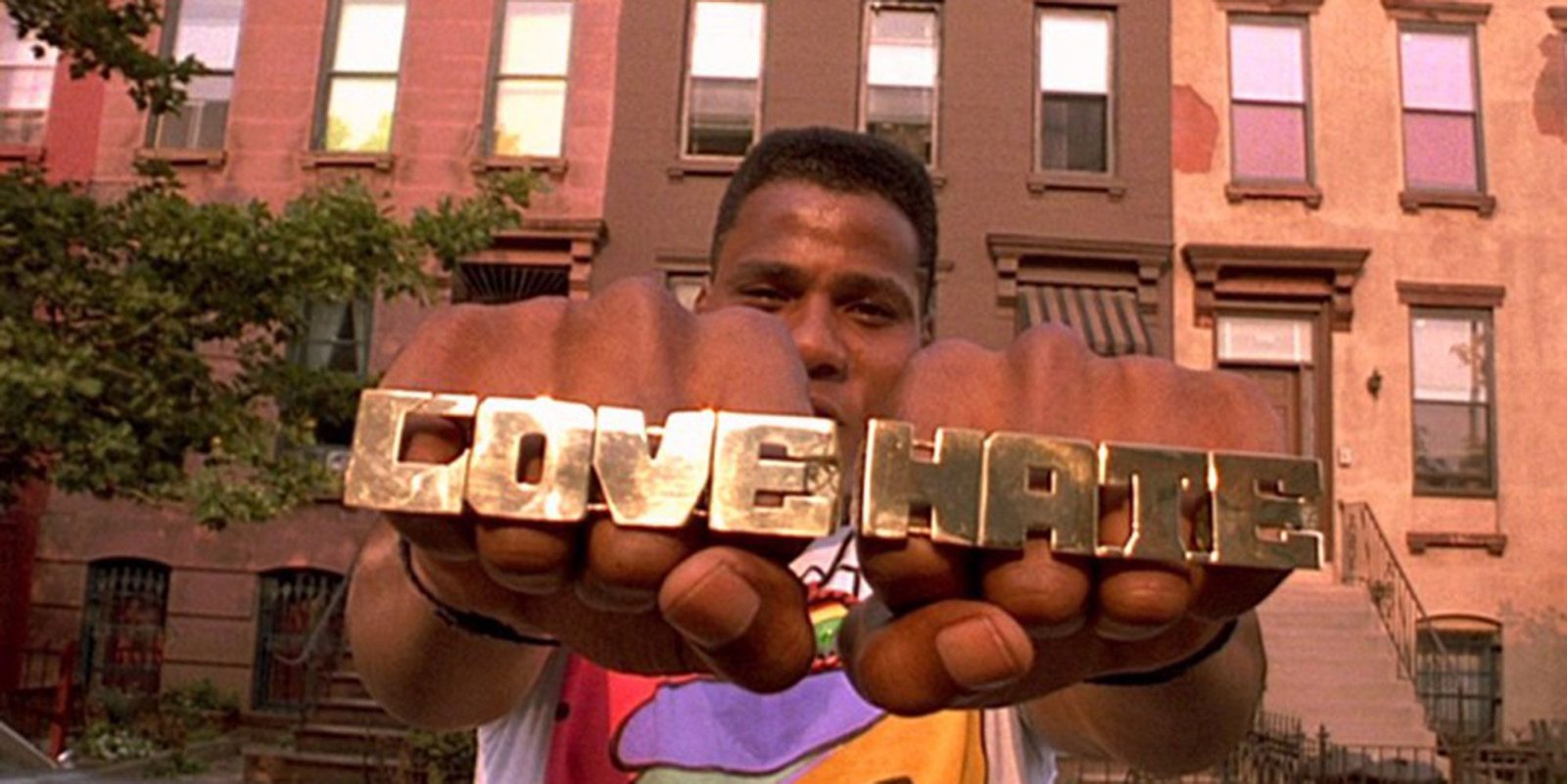 CLASSIC REVIEW: Do The Right Thing

It has been 30 years since the release of Spike Lee’s most iconic film, Do the Right Thing. 30 years have passed since the world was introduced to Mookie, Buggin’ Out, and Da Mayor. It was three decades ago that Radio Raheem paid two dollars for extra cheese at Sal’s Pizzeria, a neighborhood landmark where he would also take his last breath. But before Raheem is murdered at the hands of the NYPD and before he asked Sal to give him some more mozzarella, he interacts with Mookie and offers him the context of his new gold knucks that read “LOVE” and “HATE,”

“Let me tell you the story of Right Hand, Left Hand. It’s a tale of good and evil. Hate: it was with this hand that Cane iced his brother. Love: these five fingers, they go straight to the soul of man. The right hand: the hand of love. The story of life is this: static. One hand is always fighting the other hand, and the left hand is kicking much [butt]. I mean, it looks like the right hand, Love, is finished. But hold on, stop the presses, the right hand is coming back. Yeah, he got the left hand on the ropes, now, that’s right. Yea, boom, it’s a devastating right and Hate is hurt, he’s down. Ooh! Ooh! Left-Hand Hate KOed by Love.”

This soliloquy doesn’t just offer a reference to the 1955 film The Night of the Hunter but tells the story of Lee’s day-in-the-life depiction of that very war waging locked inside a pressure cooker. In the film, a heatwave is helping tensions rise a little faster as constant mircoaggressions allow the left hand to poke, prod, and jab until the block is left in mourning and ashes. Now, as we reflect on 30 years since Do the Right Thing, the movie is likely quite frustrating to lots of different people.

For every person lamenting how America really hasn’t changed since the film’s release, there are probably others who shake their fists wishing for more clear-cut answers or direction from its ambiguous and messy ending. Critics of the film, and of Lee for that matter, over the years see a lot of instigation but not a lot of instruction for moving forward. For years people have wondered, “Why does Mookie throw the trash can?” or “Did Mookie do the right thing?”

The problem with these questions is they focus on the riot that leads to the fiery destruction of Sal’s Pizzeria. It’s impossible to find answers to the film’s big questions in the riot scene because that’s not the purpose of that scene. What you will find in that scene is very real grief being expressed. It’s the grief of the characters in the film who are at a loss after Raheem’s death, and the grief of the artists that created the film who were inspired by the real-life violence of the 1986 Howard Beach incident. Over the years, plenty of people have been so shocked by the riot scene that they can’t move passed it and see it as the end of the film or, at least, the most memorable scene. Thankfully it’s not the end of the movie and many other scenes provide ample answers that audiences may have been missing in the last 30 years.

The left hand of hate is easy to see in Do the Right Thing. Characters are constantly shouting at each other. Faces are dripping with sweat and glowing red as they scream about every single little thing that happens. Your music is too loud. You’re taking too long giving me my batteries. You’ve scuffed by brand new, white cement Jordan 4’s. There’s so much sweaty yelling that there’s a scene dedicated to it with characters of various background exclaiming all kinds of racially charged expletives before Sam Jackson’s Mister Senor Love Daddy calls them to stop. It’s that blow across the neighborhood airwaves that might be the right hand’s most obvious counter to the left, but it is definitely not the only one.

Just as the hate hand is making tiny pin pricks throughout the film, the love hand isn’t without its jabs but they’re subtler than a shouting Sam Jackson. These strikes from the right hand started swinging off screen in the history and relationships confined in these New York blocks. They land in every altercation that doesn’t end in violence. They hit when each patron walks into Sal’s because they grew up on its dough. They push back the hate hand when Sal’s entire expression changes when he sees Mookie’s sister Jade or when Sal tells Mookie there will always be a place for him at the pizzeria. These characters have been on this block for a long time and have a deep history of doing life together. Sure, that hate hand surfaces on the streets in the heat of the summer, but deep down there is a foundation built by the love hand.

Love is many things that might sound familiar. Paul tells the Corinthians that love is patient and kind and all the rest, but we know that it is also very messy. People that love each other often yell at each other. They scuff each other’s Nikes. They throw garbage cans through each other’s windows. They trespass against one another. That is why, amongst all of the flowery language, Paul has to remind us that love never fails. John tells us how, “This is love: not that we loved God, but that he loved us and sent his Son as an atoning sacrifice for our sins.”

Left to our own devices love might fail, but, because God intervened with love, reconciliation and change is possible. 30 years later, when Eric Garner reminds us too much of Radio Raheem, when neighborhoods are still rioting, when people are still yelling, when the kind of unity the Bible talks about seems impossible, we have to remember that the love hand isn’t done. At the end of Do the Right Thing, Mookie and Sal have one last encounter in the ashes of the pizzeria. It gets heated, there’s yelling, but, in the end, there is a whisper of civility. There is a hint that the right hand is still fighting.

The gift that Do the Right Thing gives us is a true picture of reconciliation. Reconciliation isn’t a level to achieve. It’s not a box to check. It’s a lifelong work of never giving up on the fist fight. It’s taking blows and coming back out of the corner swinging ready to get hit again if that’s what it takes. Imagine what could be different in a world where everyone loves as sacrificially as Jesus. Imagine a world where a person blinded by colorblindness looks to their brother or sister of color and says, “I see you.” Imagine a world where someone who cries unity when they really mean assimilation realizes they’ve got to die to self for true unity to happen.

It may be hard to imagine those things. We may be living in a time where the hate hand has landed some crushing blows, but 30 years later Do the Right Thing is still asking us to keep fighting, to keep reconciling, and to keep loving not because it is easy, but because it is the right thing to do.