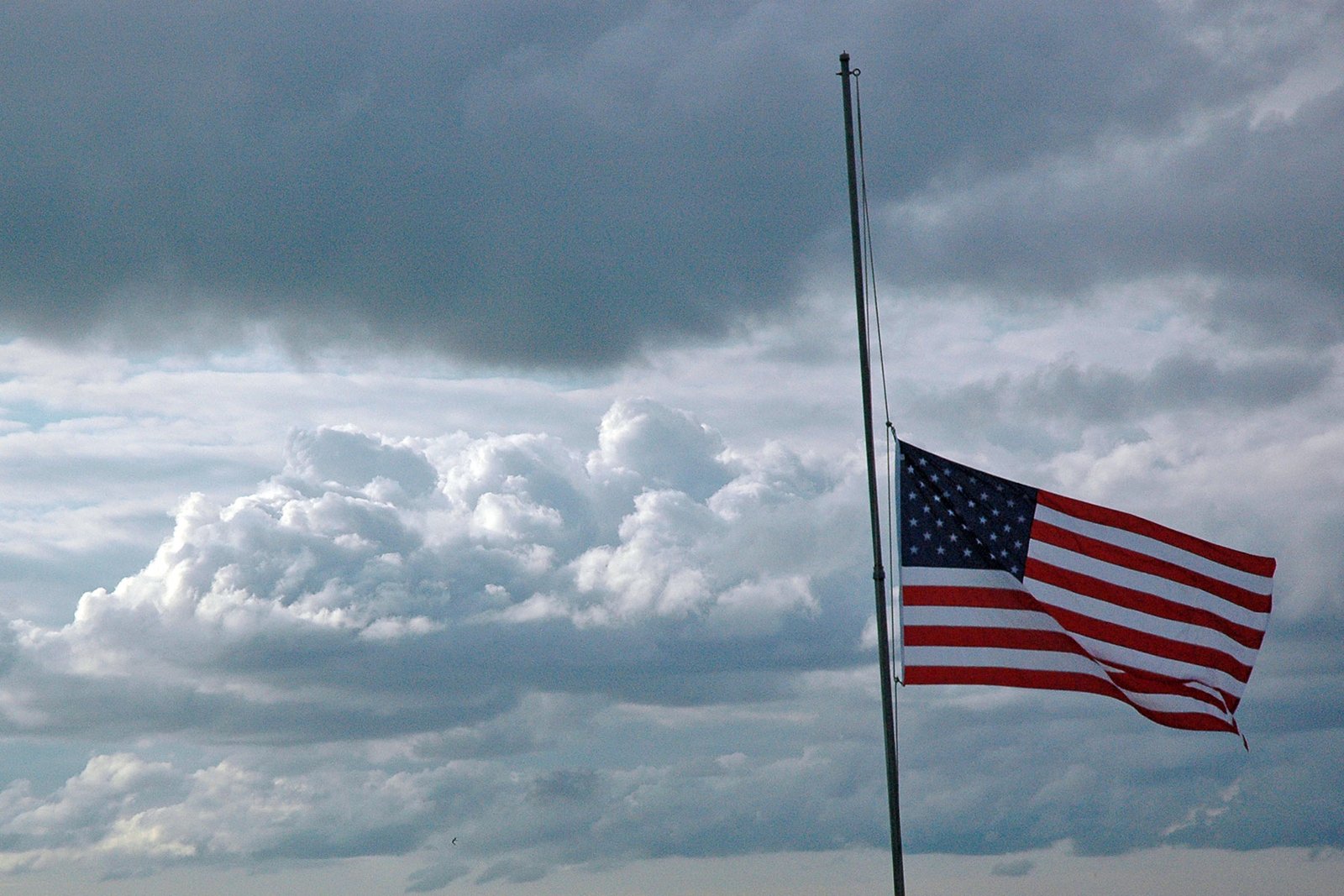 There seems to be a phenomenon taking place lately that I’ve never noticed prior to this current season in our nation. Passing by businesses and federal buildings that fly the American flag I’ve noticed more often that emblem is being flown at half-staff. I’ve always observed the various places the flag has been proudly displayed. From municipality’s town hall to individual’s homes to the local McDonald’s, there it is, beautifully displayed. But more often than not, the grand, high-flying flag seems to have gotten caught in the crossfire of a divided, angry culture and the result has been more mid-pole, than up high.

From what I understand, the purpose for the half-staff flag is a remembrance and respect for government officials who died. The times vary according to the rank of that person. For instance, for a president who has died, the flag would remain at half-staff for 30 days; 10 days for a vice-president, and so on. Also, for Memorial Day as a remembrance of the soldiers who died in battle for our country. But lately it appears to me that more often the reason for this ritual is because of “other tragic events”.

And here lies the tragedy: The sad events that we currently mourn over are the ones that could have been prevented if the gospel of Jesus Christ had been implemented in the individual lives involved and in our nation as a whole. The sad loss of life of 2 law enforcement officers in Watauga County in North Carolina, the senseless killing of innocent human beings in Indianapolis, the U.S. Capital police who were killed in D.C., the mass shooting in Boulder, Colorado, and other horrific events are reason enough for the lower flag stance. But if the truth of who we are in Christ…how loved, valued, accepted we are…had been internalized in the lives of these deranged murderers, I believe the course of their lives would have changed, preventing these awful acts. And yet the gospel (the love of God, the sacrifice of Christ, the reality of how much your life matters, equality at the foot of the cross, forgiveness and reconciliation, hope for the future and purpose for today) is sadly being suppressed with pushback from those who would like to silence this message of truth and hope.

And we wonder why there is so much tragedy.

I desperately want to see our nation become “United”. I yearn to experience the joy of seeing kids playing together without fear, neighbors talking to one another without pre-judging, and the freedom to have differing opinions without fearing a barrage of voices shaming you because you don’t go along with all that is being shoved down your throat. I desire to give grace to those who have a different perspective and I’d love for that grace to be extended to me, also. It feels as if the pulse of the nation has amped into tachycardia and so many are on edge. It doesn’t take much to tip someone over into unthinkable behaviors. Sadly, the end result tends to be innocent victims and the loss of life.

I want to see that flag rise again. Really I do. But more than that, I want to see the banner of God rise over our nation. This banner is eternal, filled with blessing, victory, and yes, power over the enemy who wants to destroy us. This banner is referred to as Jehovah Nissi (“The Lord our banner”). In ancient Israel this banner was raised to be the focal point in a battle; to give the weary warriors hope and encouragement. It was the constant reminder that our Creator was fighting for them and that He would ultimately defeat the constant opposition to His purposes.

We now live in the new covenant. JESUS is our banner as prophesied in the book of Isaiah:

In that day the Root of Jesse will stand as a banner for the peoples; the nations will rally to him, and his resting place will be glorious. –Isa. 11:10

This is the true and lasting banner. This is the one that will be raised high above all others for eternity as a reminder of the victory that He accomplished and as a memorial to the death that HE died so that we would not have to live out of our base inclinations.

As I bemoan the nation’s bereaved flag, I can choose to focus my attention on the victorious banner of my Savior. This is the reality that continues to make all the difference in the way I live. May it wave over the hearts of those who have not yet experienced its glorious effects.