Naked You Come… and Naked You Go

The year was 2001. The phone rang. I was the only one in the office so I answered. A low, gruff voice on the other end said, “I need to speak with the person in charge of your chapter at Princess Anne High School.” Uh oh. These calls could be trouble. I was on staff with a non-profit organization that worked with high school students and we never knew what to expect, often receiving calls from parents worried about their kids. I responded saying that person was me and asked how I could help. “We need to have a meeting” the bellowing voice said. “OK, may I ask what it is in reference to?” was my reply. “I want to know how I can help you” the deep, gravelly voice said back. Whew! Dodged a bullet. The next week I would meet a man who would forever change my life. His name was Jack Birsch. When we met, he was well over 300 pounds and had a shiny, bald head and smoking a big cigar. At noon. In a Holiday Inn restaurant (one of the few places left in Virginia Beach you could smoke). Thus, began a friendship which would change me forever.

We started meeting every couple of weeks, then every week for an hour, then it became two hours. He had a twinkle in his eye and a way with words. Jack was big on grace. Jack was big on love. Jack had a big personality. After we had met several times, he asked me a question in his booming voice that would become a splinter in my mind:

Jack: Have you ever seen a hearse pulling a U-Haul?

Jack: Of course you haven’t, because naked you come, and naked you go. So you better find out what matters in this life and give yourself to it wholeheartedly.

Jack continued to ask me that question every few weeks until it became engrained on my heart. I asked myself what really mattered? As I got to know him, I realized the impact of his life was still echoing all over Virginia Beach and all over the world. It seemed like almost every day I would meet someone who would say: “Oh Jack? He was a huge influence in my life. He showed up when I needed him most.”

BEGIN WITH THE END RESULT IN MIND

Take a minute to think about your funeral. Pleasant, I know. But close your eyes and imagine what it would be like. Who will be there and what will they say? If you passed away tonight, how would you be remembered? Would people be sad or indifferent? Who would be there saying you made an impact on them? Have you made a difference in this world?

Unsettling, isn’t it? Morbid? Sobering? Yes, it is. We all think we are going to live forever. But there is bad news: The death rate is holding steady at one per person. You will die. It’s just a matter of when and how.

We are temporary stewards of everything in our life. This is bad news in one sense but good news in another. It is freeing. No possessions last forever, nor are they meant to. Dead people can’t enjoy their stuff. If we figure out what matters, we can have a life well-lived.

What is important to you? What do you stand for? With what is happening in our nation and our world, we need men and women of strong fortitude and character who know the difference between right and wrong. And people who know what matters.[/vc_column_text][/vc_column][/vc_row] 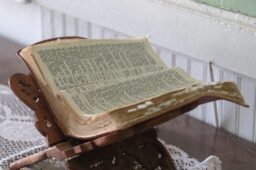